A little history of how it all started. Joaquim Fragoso started working at Tandberg in his time. He helped develop the legendary TXD tape recorder and the latest "big" amplifiers, such as the TR25. But the downturn for Norway's flagship television, radio and music technology had already begun. It had to be saved and mitigated, so when the bankruptcy came, Joaquim Fragoso was already sitting in a small company on Nesøya, importing Japanese competitors such as Onkyo, Luxman and Audio Research.

But there were financial challenges here as well. Then in 1986 Joaquim Fragoso left most of the staff and continued with Rolf Henning Hjemdahl with a audio shop, first on Nesøya and then in Sandvika. During this period, the first version of a 'different' solid teak and mahogany amplifier was constructed, of which 25 copies were sold. 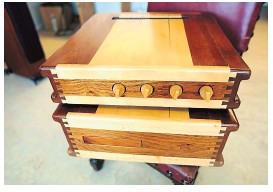 In 2007, the audio shop in Sandvika was sold, a corner room on the floor above Biltema became our new room and the dream of making the 'ultimate' amplifier had started. In 2010, the first model was completed. "Aura Grande Integra", a 26 kilogram heavy silver shimmering wonder of 2 x 300 watts, with only six gold-plated buttons on the front. In the same year, three more models were launched, "Aura Integra" 2 x 180 watts, "Aura pre-amp Deriva" and the final stage "Aura power-amp Dual Mono", MK2.

Many good feedback has been given on our products and we are constantly working on and improving them.